Life is an illusion...

or so some say.

There is, perhaps, no better example of this than Florence Foster Jenkins. Actually a tragic character, she was born into a wealthy republican family, bought her friends, and believed that she could sing. When the truth was finally revealed to her in a few New York City newspapers, it killed her quickly. She is best remembered as something (not someone) to laugh at. Her 'music' survives to this day.

Her most famous (deathbed?) quote:
"People can say I could not sing*, but they can never say I did not sing."

Like many republicans, she was simply - for the most part - out of touch with reality. Her 'friends' went along for the ride because of her wealth and power - and the fact that she could provide employment for many of them. *What it REALLY should sound like.
Posted by Mysterion No comments:

Fakes of a feather flake off together.

Above: a fake - linguistic analysis. Believers go here.
You should be aware - if you can read - that the biblical folklore in general and archeology in particular do not agree. THIS old article from a decade back states this point clearly.

Now what you may not know is that as the fakes are exposed, the American press is silent. And there is a good reason for this. As long as you drink the cool aid, you are supporting the tyranny of the few (e.g. the republicans*). And there are plenty of dishonest postings on the web - swimming up river. And this is as it should be. You see, stupidity is as stupidity does and I have a theory that the human race is terminally stupid. Don't disappoint me and prove me wrong.

* And what about "log cabin" republicans. OOPS! They claim Lincoln was a gay! And if they are correct? Lincoln is still dead. (But so is the republican party)

"The Republican brand is in the trash can. I've often observed that if we were a dog food, they would take us off the shelf." - Rep. Tom Davis (R-Va.)

Wait and see.
Posted by Mysterion No comments:

PRINCETON, NJ -- The percentage of Americans who identify with some form of a Christian religion has been dropping in recent decades, and now stands at [an over-reported] 77%, according to an aggregate of Gallup Polls conducted in 2008. In 1948, when Gallup began tracking religious identification, the percentage who were [self-reporting as] Christian was 91%. source

And, there is good news and bad news. The good news is that more Americans are waking up. The bad news is that half of the people surveyed lacked candor in reporting their actual faith, or lack thereof. In short, a lot of people lied when they claimed that they went to church. They just wanted to 'keep up appearances' as the Brits say. They wanted to be seen as 'good people' and [many think] 'good people go to church.'

Despite suggestions that the economic recession might cause religiosity among Americans to increase, there has been no evident change... In short, it might not. 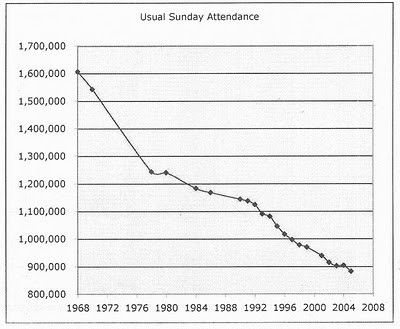 Well, this chart represents just one major Xtian sect in Calif. And it's not the biggest one (Roman Catholic). But the trend is clear. That half that stopped attending is not named Robert. There are fewer butts in seats at church. That declining attendance reflects, in part, the fact that old people tend to die. You know, those people whe went to church back in 1968 are no longer able to do so - owing to their close association with mortality. Most churches would need to double membership just to tread water. And the parson might want to live in an $800,000 McMansion. And the foreclosure notices just keep on coming. Say goodnight, Gracie.
Posted by Mysterion No comments: