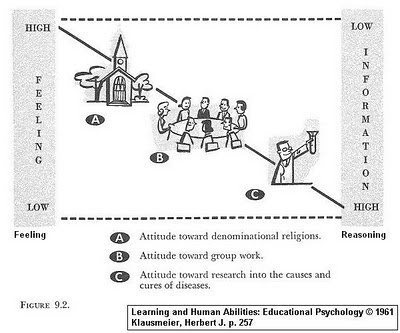 The above is my favorite illustration from any book that I have ever encountered.
Perhaps I will delve into it just a bit. At one extreme, you have "hot" emotionalism which leads people to _scream_, _cry_, _shout_, _fart_, and dance with snakes. At the other extreme you have "cold" rationalism where people reflectively think, reason, and dare to understand. Revelation comes not from emoting but rather from reflective thinking.

Now I am not addressing ENTJ personality types here. Nor am I addressing INTJ folks. Nor am I even referring to the Myers-Briggs Type Indicator®. There is some value to the MBTI® assessment. Especially where you are trying to cure a "sick company" or dysfunctional board of directors.

"The prognosis for the next few years is bad with a chance of worse."

Other days, I am other things than slightly ES and moderately TJ... personality is dynamic and, like everything else in nature, subject to change. I am most often ENTJ. Not that it matters because it doesn't. I'm retired. If my conversation at PEET's offends thee, rip out your ears. But, please, go somewhere else to do it.

It's the "T" part - THINKING over emoting. I recall one incident at the SFZC when Brad gave a talk about Shobogenzo (and his book Sit Down and Shut Up). During the questions period, a woman went on and on in a testimonial about how sitting Zazen had brought her compassion to full fruition. I studied the absence of reaction in the room and eventually she noticed it also. This was clearly not a cry-in.

What do 5,000 battered women have in common?

(Pounding fist on table and screaming) "They just won't learn to listen!"

Analysis: Battered women are often paired with insecure men who lack emotional maturity, coping skills, and often have severe anger control issues (the anger arises from a general lack of ability to compete in the job market, gain and keep the respect of others, hold one's own ground in a conversation, and a propensity to self-medicate with alcohol or narcotic substances). These women often have serious issues of their own - co-dependence being one.

Battered voters have an instrument of revenge - the ballot. If and when these voters wake up to the realization that they have been battered by the emotionalism of right wingnut radio and other republican thugs, they will tune them out, cast them out, and never return their support.
Posted by Mysterion No comments:

Besides following some in-house "book of style" or "accepted practice", there's no reason not to use the Oxford comma, unless it's to confuse readers! In the translations of archaic languages, the matter of punctuation, usage, and context do matter. Punctuation, by use of additional little marks or character embellishments, was used by the ancients. The use of ancient (archaic) punctuation is not well understood.

Let's face it. Subtle changes in punctuation can make profound differences in meaning (cognitive content).
Posted by Mysterion No comments: