Nothing Biblical about Science

There is nothing biblical about science. And, there is nothing scientific about bibles. A bible is not a history, a psychology book, a math book nor a geographical dictionary. A bible is a constrained collection of regional folklore. There are as many bibles as there are distinct regions - all subject to change over time.

So, who was Adam? Adam is a word that means 'first man.'

To science, that means searching for the most recent common male ancestor (MRCA). "From the beginning, we are all Africans."

Although there is little agreement as to when Adam (or the two Adams) lived, it seems that he (they) lived in Ethiopia between 60,000 and 150,000 years ago.

For Eve, mitochondrial DNA (mtDNA) is sequenced because mtDNA is what the mother passes on to all of her offspring. Well, there were two Eves. Or there was a Lillith anjd an Eve. One lived in the Congo, the other in Southern Africa.

"When a sample of 74 Gullah/Geechee mtDNA sequences were compared with the sub-Saharan database, approximately half of the mtDNAs were identical to two or more mtDNAs in the database and only seven mtDNAs matched mtDNAs from a single ethnic group. The remaining 28 mtDNAs were not identical to any sequence in the expanded database.

Similar results were obtained when the 97 African-American AFDIL mtDNAs were compared with the databases. Approximately half (49) of the mtDNAs were identical to multiple sequences in the original database. As with the Gullah/Geechee sample, fewer than 10% of the sequences matched a sequence from a single ethnic group, and 40% of the sequences did not have any perfect match in the database (Ely et al. 2006:3)." source

What we DO know is:

There were not 12 tribes in the mythical land of Israel. There are only eight tribes in all of humanity. And none were unique to Israel. Here is a picture: 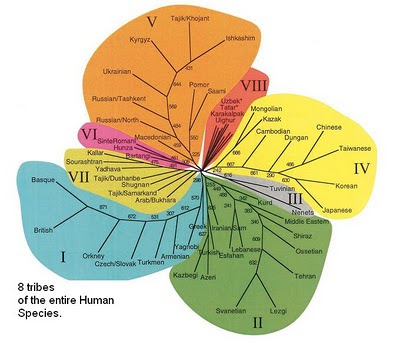 There is one more small problem I need to point out. 73,000 years ago, Mt. Toba exploded and wiped out 99.9987% of the human species. Only three [Mongolia, China, Africa] (or five) [Mongolia, China, West Africa, South Africa, Spain] tiny clusters survived the volcanic winter. There were no more than 10,000 human survivors on the entire planet.

One of those groups was to the East of Mt. Toba - in present day China/Laos/Cambodia. They are identified as the purple color, or M9, in the picture below: 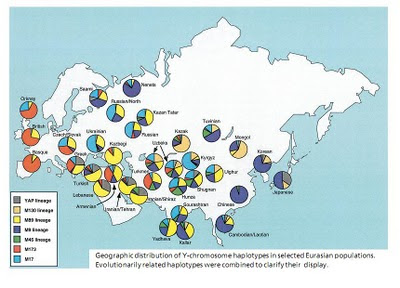 For the dynamics of this, see: http://www.bradshawfoundation.com/journey/

The Cambodians migrated WEST from Indochina after the Toba event and met the second migration out of Africa in present day Iraq! The Levant was not even populated until 12,000 years ago - a very recent period in the overall time that humanity has been leaving trash heaps on the planet.
Posted by Mysterion No comments: