The Day After Oil!

Many people are good at denial. Very good. We produce about as much oil today as we produced in 1950. And we should consume less oil than we consumed in 1950 - but we don't.

Oil is a finite resource and one day - soon - oil will be scarce, very expensive, and for use by the very rich only. THAT - in part - is why the rich are stripping the equity out of the middle classes and creating a vast new pool of poverty.

Now I am not saying this is good or bad, I'm just saying it seems like the emerging vision of the future that the John Galts have for the moochers. Some take a different view. While the middle class still has the right to vote (and there is a move by the elites to get another vote for every $20,000 in net worth that they have) there remains the possibility of conversion to photo voltaic "solar panels." Maybe like Japan. Or maybe on a smaller scale, like Germany.

Back in 1979, President Jimmy Carter did the unthinkable: He installed solar panels on top of the White House. The green addition was used to heat water for the staff eating era — and usher in a new era in American innovation and independence from foreign fossil fuels.

Republicans are idiots. Idiots. And there are so MANY that they fight to the top ten spots!
Posted by Mysterion No comments:

Today, a couple of Jehovah's Witnesses were handing out comic books in the local plaza. A local John de Arms was attempting to get them to move along as their presence is not all that good for business[PFD]. Well, I wondered up, stopped, coughed & spit and said:

Apparently, their deity has an exemption from protecting them from THAT ONE as they high-tailed it outta there so fast that the draft sucked up the trash.

The John de Arms laughed & said: "If you had medicinally resistant TB, the county board of health [PDF] would have you quarantined!"
"Yep," I said. "I know that and you know that, but THEY didn't know that."
He said: "Praise stupidity!" (To which I said: "Amen!)

Then he asked: "When does that allergenic bronchitis let up?"
My answer: "Even next week, or next month works for me."

Sometimes, it's better to avoid silence.
Posted by Mysterion No comments:

Consensus Reality isn't Reality at all.

Consensus reality is merely that (myth) which is accepted as reality by any group of individuals in a given place during a given time. The very use of 'consensus reality' is, with the rare exception, disparaging. It typically implies that the ‘consensus reality’ is reasonably false. (The phrase "consensus reality" may also be used to refer to a generally accepted belief - a belief by most, for example, in a creation myth.) [Not to be confused with reasonable belief.] The theory of reality enforcement holds that a belief should be enforced or promoted through various means including sanctions applied against those who challenge the belief - for any reason. A classical example being that "The KJV is the true and inspired word, etc." Believers in reality enforcement are typically sympathetic to anti-psychiatry and would describe involuntary commitment as a form of heresy (as in the course of treatment the patient may be encouraged to abandon beliefs the psychiatrist considers to be delusional). Mental health codes in some states (USA) specify that a diminished capacity to recognize reality is a significant part of the standard for determining mental illness - something to which believers in [consensus] reality enforcement would most obviously object. The Exorcism of Emily Rose Emily Rose was actually Anneliese Michel. From her birth in 1952, Anneliese Michel was a ‘religiously nurtured’ young girl. Her life changed in 1968 when she had a Grand Mal epileptic seizure. A neurologist at the Psychiatric Clinic Wurzburg diagnosed her with "Grand Mal" epilepsy. Because of the strength of this type of epileptic fit, and the depression that followed, Anneliese was admitted for treatment in the Psychiatric Clinic.

As soon as her epileptic fits began, Anneliese started seeing devils during her daily prayers. In the fall of 1970 (age 18), Anneliese developed the belief that she was possessed (this would eventually become the consensus reality). Thereafter, she needed no other explanation for explaining 'the visions' during her prayers. Anneliese also reported hearing voices saying "stew in hell". She mentioned her demons to the doctors only once, claiming that they were giving her orders. Since she believed the doctors were unable to help her, Anneliese experienced a transference from little faith in medicine to complete faith in Catholicism. It was an error with deadly consequences.

In the summer of 1973, her parents shopped various and sundry catholic parishes for the rite of exorcism. Their requests were invariably rejected and they were advised that Anneliese should continue with medication and Psychiatric treatment. It was explained to her parents that the process by which the Church determines a possession (Infestatio) was strictly defined, and until all the criteria was met, a Bishop would not approve the rite of exorcism. The requirements included an aversion to religious objects, speaking in a language the person had never learned, the display of supernatural powers, and so on and so forth. [Anneliese had none of these characteristics.]

By 1974, Father Ernst Alt requested a permit to perform the exorcism from the Bishop of Wurzburg. The request was rejected. The fits did not diminish, and her behavior became even more erratic. At the house in Klingenberg, she insulted, beat, and bit other members of her family. She refused to eat normal food, slept on the stone floor, ate spiders, flies, and coal, and began drinking her own urine. Anneliese began acts of self-mutilation; tearing off her clothes and urinating on the floor became commonplace. Hospitalization was not the preferred option for a family of complete devotion to their faith.

After finally somewhat buying in to the 'consensus reality' in September 1975, the Bishop of Wurzburg, Josef Stangl, provided Father Arnold Renz and Father Ernst Alt with 'an order' to perform "The Great Exorcism" on Anneliese Michel. It seems that Anneliese would be saved from several demons, including Lucifer, Judas Iscariot, Nero, Cain, Hitler, and others. From September '75 until July '76, one or two exorcism sessions were held each week. During the initial time of this intense new attention, Anneliese would go to school, take her examinations at the Pedagogic Academy in Wurzburg, and attend a couple of masses a week at the local Roman Catholic church.

The epileptic seizures, obviously, did not stop. Without her medication, she would more frequently find herself paralyzed and then unconscious (classical symptoms of the grand mal seizure). The erstwhile exorcisms continued over many more months, always with the same old prayers and tired incantations. Anneliese, entering the helpless-hopeless phase, now completely rejected food. Her knees ruptured from the obsessive genuflecting she compulsively performed during the now daily exorcisms. Approximately 40 (now notorious) audio tapes recorded much of the proceedings [or festivities, if you will].

The last day of Exorcism was June 30th, 1976. Anneliese was suffering from Pneumonia. She was running a high fever. Exhausted and unable to physically genuflect herself, her parents held her up and carried her through the necessary motions. "Absolution" is apparently the last word Anneliese spoke to the two exorcists.

Anna Michel recorded the death of her daughter on the following day, July 1st, 1976, and at noon, Father Ernst Alt informed the authorities in Aschaffenburg. The Klingenberg festival of the macabre had thus ended. Once informed, the senior prosecutor immediately began an investigation. It took more than 2 years to to bring Annaliese's case to court. Anneliese's parents and the two exorcists were accused of negligent homicide. The "Klingenberg Case" would be decided upon just two questions: What was the cause of death for Anneliese Michel, and who was legally culpable?

According the forensic evidence, "Anneliese starved to death". Specialists claimed that forced feeding just one week before her death would have spared Anneliese's life. One sister told the court that Anneliese did not want to go to a mental home where she would be sedated and forced to eat (Remember that Anneliese was 24 years of age).

The exorcists tried to prove the presence of the demons by playing the tape recordings. The 'demon' who called himself Hitler spoke with a Frankish accent (Hitler was Austrian). Those few present during the exorcism had no doubt about the "consensus reality" of the presence of demons - it was "the generally accepted belief" among all four.

The psychiatrists, who testified only by court order, spoke about the "Doctrinaire Induction". They demonstrated (from the recorded tapes) how the priests had provided Anneliese with the contents of her psychotic behavior. As a consequence, her subsequent behavior was merely 'validating her demonic possession.' They also testified that Anneliese's diagnosed Temporal Lobe Epilepsy had facilitated the development of her psychosis.

The verdict was nowhere close to being as harsh as many expected. Anneliese's parents and the two exorcists were found guilty only of manslaughter resulting from criminal negligence (the least responsible form of culpability) and aiding in the withholding of necessary medical treatment. The four were sentenced to a brief 6 months in jail (three years was typical for a manslaughter conviction at that time). Her parents, however, were immediately released on probation. 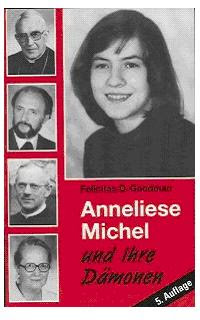 Thereafter, a commission of the German Bishop-Conference, after reviewing the incident, declared that Anneliese Michel was not possessed.

However, because of the growing regional "consensus reality" following this case, Anneliese's body was exhumed eleven and a half years after her burial, only to confirm that she had decayed normally thereby rendering immediate beatification somewhat out of the question. Her beatification landed on the back burner - so to speak.

Beatification (from Latin beatus, blessed, and Latin facere, make) is a recognition by the RCC of a dead person's accession to Heaven and their capacity to intercede on behalf of individuals who pray in his or her name. A beatified person is given the title "Blessed".

Regardless, her grave became a place of pilgrimage for believers - that their blessed Anneliese Michel actually fought Lucifer, Judas Iscariot, Nero, Cain, Hitler, and so forth. Whatever. We should wish them all well - and remind them each to keep taking their meds.

The formula for reasonable inquiry consists of just four steps:
1. State the claim. Write it down to nail it down! (Unreasonable claims are dynamic-frequently change when subjected to critical examination).
2. Examine the Evidence, if any, for the 'nailed down' claim.
3. Consider Alternative hypotheses. (Consult educated outsiders). (e.g. Avoid consensus reality participants).
4. Rank (put in order), according to the 'Criteria of Reasonable Adequacy', each Hypothesis.
Go through these four steps any time you're faced with an extraordinary claim. (e.g. Anneliese was possessed.)

Reject dualism (e.g. Sex is good or bad, beer is good or bad. Sex is sex and beer is beer). Dualism, like belief, only confuses the core issue of the extraordinary claim.
Posted by Mysterion No comments: