Letting some light back in...

Well, something was going on in the Levant and it was not traditional!

That something was, of course, Buddhism. And Buddhism was not about making war - or making a lot of sons so that they could go to war for you at a later date. Buddhism was about here and now (Luke 17:21) - and peace (Matthew 5:9).

For a backward population of caravan robbers and nomadic goat herders, all THIS peace talk was a totally alien concept. But it was there (in Jerusalem [here is a PDF]) and it had the ruler's support. It was as if the anchor of Seleukos II was on one side of the coin and the wheel of Dharma was on the other. Did I mention, THAT is exactly the case?

A century or two later the folks were still talking about it - through the distortions of time, space, and culture. And that alien monasticism was re-branded the Essenes.

Thereafter, what scholars started to see in ever more clarity was that Christianity - once thought to be the Hellenization of Judahism - was obviously the Hellenization of Buddhism. In short, the old school was wrong - dead wrong - yet again for yet another time yet (&c.)! (and Yet, yet, yet.) 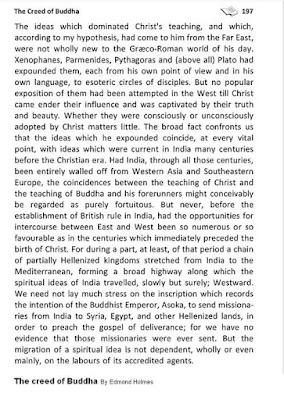 Rather than go on, I'll recommend a book as a starting point.
Posted by Mysterion No comments: