On Christmas Eve in 1998, five days after the House impeached President Bill Clinton, Brett Kavanaugh urged Kenneth W. Starr, the independent counsel not to pursue a criminal indictment of President Clinton until after he left office. Kavanaugh, now Trump’s nominee to fill the Supreme Court seat left vacant by Anthony Kennedy, delivered the advice in a private memorandum made public on Friday by the National Archives. It shows that Judge Kavanaugh believed — rightly, it turned out — that the Senate would fail to convict the president for the “high crimes and misdemeanors,” for President Clinton’s affair with Monica Lewinsky. He urged Mr. Starr to close the independent counsel’s office, which had spent four years pursuing President Clinton. The cost of Mueller's investigation of Russia’s interference in 2016 (e.g. attack on Democracy) is about on pace with that of former special prosecutor Ken Starr’s inquiry into ex-President Bill Clinton (blow job) and former first lady Hillary Clinton’s real estate dealings in the 1990s. Starr spent over six years on the Whitewater investigation and billed taxpayers more than $70 million. 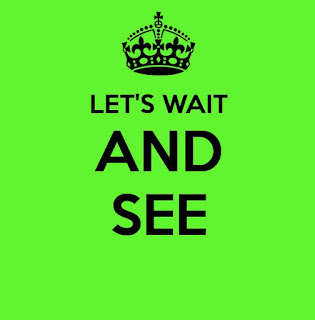 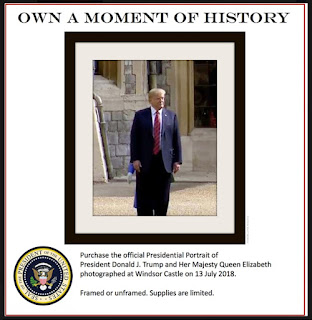 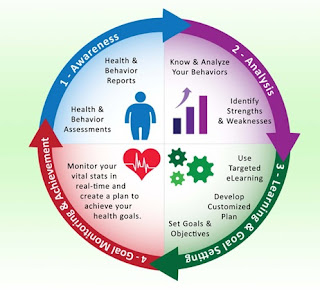 These tools may mitigate a drug addiction "behavior" (CAPD) or train someone to make their bed each morning. 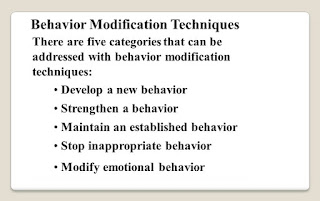 Behavior modification is based on operant conditioning. 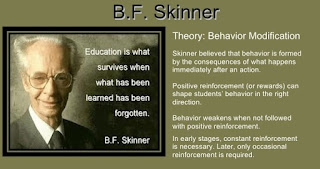 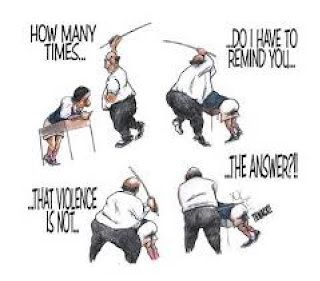 B.F. Skinner conducted scientific research in the 1950s by training rats through rewards and punishments. His practices continue to influence practicing psychologists to this day. 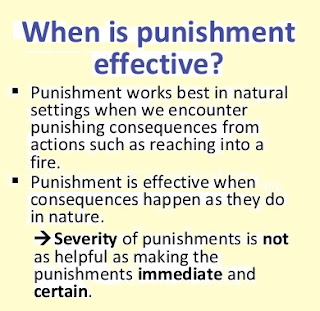 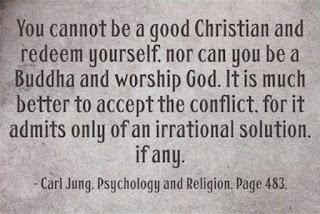 2. Negative Reinforcement
Negative reinforcement is generally recognized as ineffective. Shunning is the oldest form of punishment (expulsion from the tribe). Pointing at a poop pile on the kitchen floor and shouting "No!" leads only to confusion.

3. Punishment
Punishment is generally recognized as least effective and most counterproductive. Consider the case in which people gather to watch a pick-pocket get his hand chopped off and are victimized by swarms of pick pockets in the crowd while they wait. Research has found that inmates "earn" greater amounts of illegal money after they serve time in prison. Violent parents raise violent children!

4. Emotional Freedom Technique (EFT)
Also known as Meridian Tapping, EFT is based on the premise that negative behaviors stem from 'short circuits' in the body’s 'energy system.' This technique is done by drumming on certain areas on the body to balance energy and release the short circuit. Quack, quack!

5. Neuro-Linguistic Programming (NLP)
The NLP technique is about communication. We communicate with others and ourselves, and that affects the way we behave. Communication can be altered by removing a single word: "Hate" from the lexicon. Swear words are frequently targets of NLP 'programmers.'

6. Meditation
Meditation has been used for centuries to improve the brain and make physiological changes in behavior. Meditation is one of the best behavior modification tools in existence. It helps alleviate anxiety and depression, causing improvement in a person’s sense of well-being. 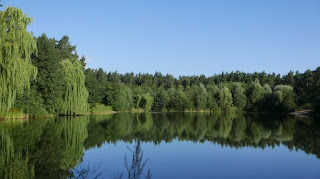 8. Cognitive Behavioral Therapy (CBT)
CBT is a psychotherapeutic approach that addresses maladaptive behaviors through goal-oriented procedures. CBT puts the focus on the “here and now”, a structuring of the path, a guidance role by the therapist, and on alleviating both the patient’s vulnerability and worrisome symptoms.

1. Free advice is often worth exactly what you paid for it! I estimate that there are over 900,000 incels in North America and perhaps 9,000,000 in the Middle East. 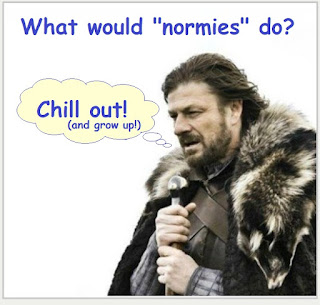 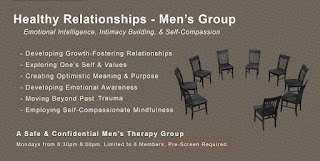 Women form a vocal part of the incel community, whether as incels themselves or allies creating a community of support within a culture that often teaches its members that support is a hopeless pipe dream. The nihilism of inceldom feeds its extremist toxicity and misogyny. Members being kind and supportive of each other’s mental health, is a start. Here is some constructive advice for Incels: • Stop whining. • The Incel (Involuntary Celibacy) Problem is not a Problem, it is a condition. • Blaming and externalizing ‘the problem’ changes nothing. • Dwelling—even obsessing—on this condition is not constructive; it is destructive. • Get off Reddit, 4Chan, etc. as if these help (they most certainly do NOT). • Turn off FAUX News. You are being a sucker for watching. • Avoid any of your peers that consider themselves “players” and women as “conquests.” This is mental poison. It fuels bitterness and despair. • Figure out what kind of love you want in your life (beyond recreational sex), the kind of person that wants the same things, and develop a rational plan for meeting that person. • Work on yourself – you’re half of any sexual encounter or relationship. To be desired, be desirable. • Be yourself. Don’t try to be Richard Cory (or somebody else). • And above all, don’t kill anyone. Eternal celibacy is infinitely preferable to prison sex. 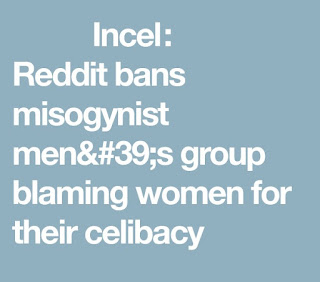 Stop looking ONLY at yourself. Find a distraction! Learn to enjoy frequent outings by yourself! 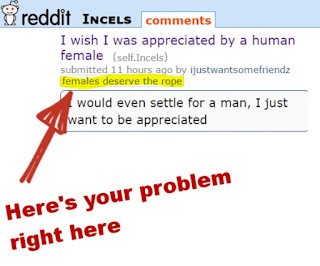 Get OUT of the "feedback loop of despair." 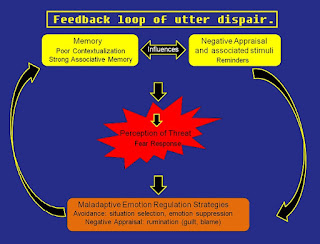 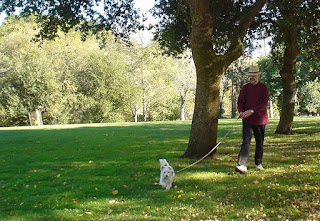 Minutes before a man (depicted immediately below) killed 10 people in Toronto (by driving a van into them), he posted on his Facebook page “The Incel Rebellion has already begun. We will overthrow the Chads and Stacys. All hail the Supreme Gentleman Elliot Rodger.”

Call it a temporary morbid curiosity about incels. “Involuntary celibates,” are 'men’s rights' activists who blame women for their inability to find sexual partners. Incels want male supremacy (like the Taliban), support rape, and have committed several mass murders motivated by their ideologies.

The incel community exists primarily online, on forums such as 4chan and reddit, and because of this, incels are able to remain anonymous and unaccountable, leading them to the extremes of misogynistic behavior. 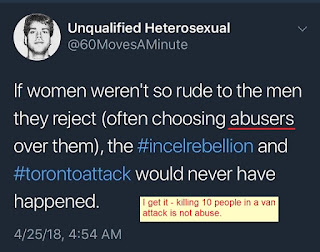 The ‘manosphere’—mostly situated on Reddit—includes groups like ‘Redpill,’ a subculture that aims to ‘awaken’ men to their supposed oppression.

Among the “incel” movement, there is a pathological fixation on sex and women, and a self-pitying perception that everyone else, except the community of “incels,” is having sex. The incel plays "the victim" in a perceived prison of Gynocentrism. 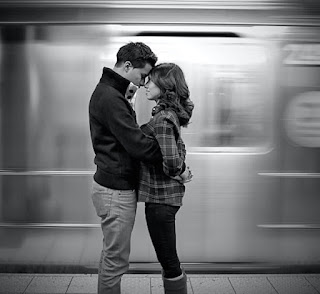 Women are craved, but they are also reviled for what the incels believe is their selective promiscuity: Stacys seem to be having sex with everyone but them. But for almost everyone, rejection is hard to deal with. Incels JUST DON'T GET that lesson. 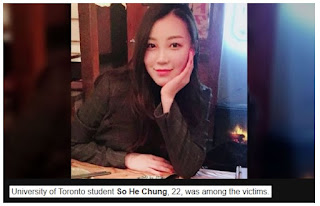 This is internalized as a grave personal insult. The function of the “incel” movement is to transform that personal grievance into an ideology that casts women as despicable sexual objects.

The core emotion is sexual shame. It’s not just sexual frustration; it’s psychotic shame. Incels are resentful of the (perceived) sexual success of others. Lacking social skills (remember, many of these folks have "Asperger's*.") incels gravitate toward an online subculture to rationalize their shame and redirect the blame for their failure onto Stacys or join ISIS/ISIL. Again, the online INCEL community is a vortex of deapair! It is actually counterproductive. (*Asperger syndrome is on the “high functioning” end of the autism spectrum.) 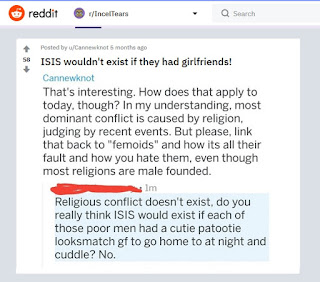 The incel subculture takes the bitterness and sadness most feel when faced with sexual and romantic frustrations and turns this misery into a mode of being. 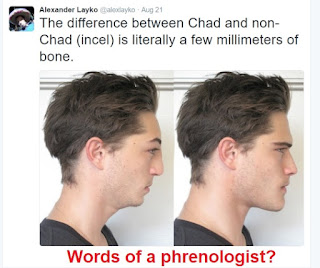 Incels love/hate women and themselves to a nearly equal degree. And, the incel subculture encourages both kinds of hatred. It has transformed men dealing with depression — or ordinary unhappiness — into a veritable underground army of angry, bitter misogynists who feel they have nothing to live for in our “gynocentric” society. 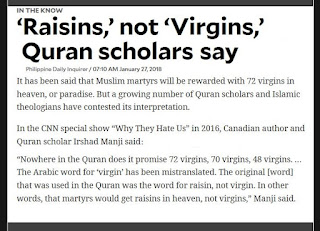 Quran promises 72 virgins to martyrs, is that right? According to Manji and many others, it is not true. Several scholars studying Quran suggest that the word used in the holy book does not promise virgins, but lush raisins! So, all those idiots died for for 72 raisins. (Perhaps there IS a god in heaven after all! LOL) 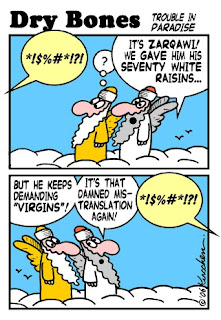 [The recruiters] actively look for broken individuals who they can promise acceptance, identity, a wife, and success. Because these people are socially awkward — not fitting in — they are easy targets for ISIS, Trump, and the alt.right. 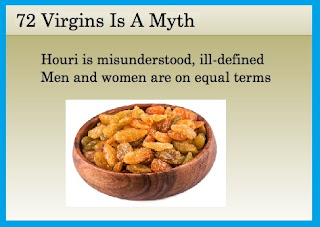 The gods must love simple fools. They made them in great excess! tomorrow: a couple of SERIOUS suggestions by which incels can free themselves from their demons -- or more precisely, from their self-imposed imprisonment (improve their perspective) Same bat time, same bat channel...
Posted by Mysterion No comments: