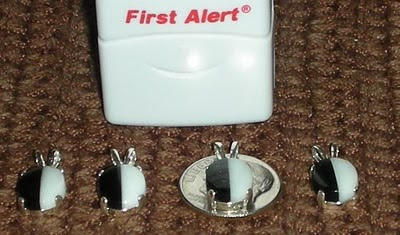 This is the last batch of Onyx pendants. There are no more - 1/2 black onyx and 1/2 white onyx crystal ovals. (Click on picture for larger view)

Why is the black on the dextro and the white sinister?

Onyx, a type of chalcedony quartz, is mined in Brazil, India, California and Uruguay. It has a fine texture and a multitude of colors.

Onyx is Greek meaning a finger nail or claw. One day while Venus (a.k.a. Ishtar, Mari) was sleeping Eros/Cupid cut her fingernails and scattered them on the ground. Because no part of a deity can die, the gods turned them into stone - onyx.

All colors of chalcedony from white to black are called onyx. Today, we preface the word with black (e.g. black onyx). Thus, there is no difference between the left half and the right half of the pendant except for our perception of it.

The mystic symbolism of "it" follows:
In weakness, we seek light; in strength, we face darkness.
or something else...

On another note, Bumble Bee Doggie is not displaying dualism in his yellow and navy sweater. High styles for the haughty Westie-Poo! 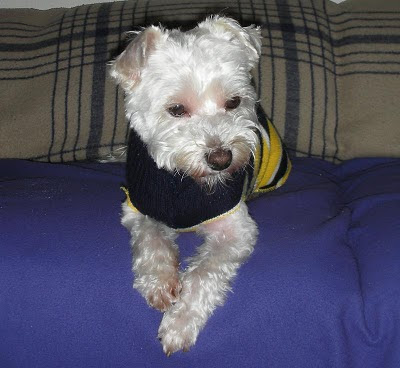 What is the difference between now and zen"

Where Buddhism and psychology overlap (and many post-graduate psychologists - through Jung - are immersed into Buddhist philosophy) is simplified here:

If you dwell in the past, anticipate depression.

If you dwell in the future, anticipate anxiety.

If you dwell in the present moment, anticipate bliss.

On a more intermediate level: "Ignorance may be bliss, but thought suppression promotes superficial cognitive processing."

Zazan is the nemesis of thought suppression. Through Zazen, you simply learn to deal with thoughts as they bubble up from the subconscious mind and move on - or you don't.

Yet another book (please read this first)
Posted by Mysterion No comments:

"That dang Devil made us do it," sez Vatican.

Don Gabriele Amorth, top dog in the exorcist biz over on the Vatican Hill, said: "the Devil is at work inside the Vatican [City]", and the sex abuse scandals are proof. Fr. Amorth, 85, said that satanic infiltration included "cardinals who do not believe in Jesus, and bishops who are linked to the Demon".

Father José Antonio Fortea Cucurull, a Rome-based exorcist, said that Father Amorth had "gone well beyond the evidence" in claiming that Satan has infiltrated the Vatican [City]. Rome, maybe.

"Cardinals might be better or worse..." but many have erect intentions, he said.

Father Amorth told La Repubblica that the devil manifests himself with afflictions in the person he possesses. He said that every church should have an exorcist. Under Church Canon Law any priest can perform exorcisms. Only a chosen few are trained in the ancient rites.

He is the president of honor of the Association of Exorcists and downright opposes the 'blunt sword' approach.

Well, that's their story. Now let's see if they stick to it. Oh, and avoid the split pea soup.
Posted by Mysterion No comments:

When a student said: "A college degree proves nothing."

I replied: "A college degree proves that you finished something that you once started."

Thus, when someone in HR (human resources - the personnel screening part of companies) detects the absence of a degree, a red flag is raised. Assuming that they read the rest of your resume (which is not a safe assumption) they may read about the experience you apparently bring with you from previous employment. The probationary period gives you an opportunity to display those job skills you claimed to have through experience.

Seven Intelligences: Gardner, using biological and cultural research, formulated a list of seven intelligences. This outlook differs from the traditional view which recognizes only verbal and computational intelligence.

The seven intelligences Gardner defines are:

Linguistic Intelligence--having a mastery of languages. The ability to effectively manipulate language to express oneself rhetorically or poetically.

Bodily-Kinesthetic Intelligence--the ability to use one's mental abilities to coordinate one's own bodily movements. This intelligence challenges the popular belief that mental and physical activity are unrelated.

Although the intelligences are anatomically separated from each other, Gardner claims that the seven intelligences very rarely operate independently." source
Posted by Mysterion No comments: