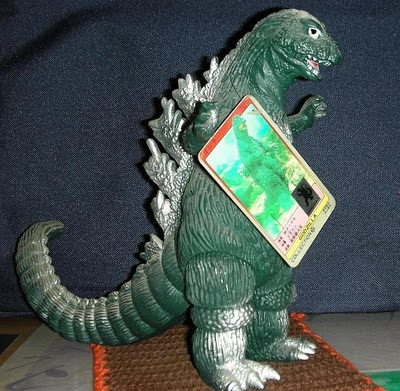 Godzilla (1954): Godzilla is English for Gojira. Filmed in stark black and white, Gojira tells the story of a fire-breathing monster who is disturbed by American atom bomb testing in the Pacific Ocean. The monster attacks a number of ships before entering Tokyo and destroying the city during a rampage.

Gojira is seen as an allegory for the atomic bomb. He is an unstoppable force, powered by radiation. He lays waste to Japan similar to what occurred in World War II . This movie was made only nine years after Japan's defeat. Gojira was filmed in a completely serious manner.

Gojira was released in the US under the title "Godzilla, King of the Monsters." Several minutes' of Japanese footage were deleted and new footage of the actor Raymond Burr was inserted into the film, presumably so that American audiences would have an Occidental with which to identify.

The figurine depicted above is #32 out of a collector's set of 50. I purchased it at Isetan in the spring of 1982. This Godzilla has yet to destroy the front room, let alone the town, but let's be patient. He may wake up before you do.

Where is America going???

This is one vision:


Ya' gotta admire them Pentecostals. Sarah Palin is a Pentecostal, amen.


Will these fools ever 'spit out the hook?' Sometimes I seriously doubt it.

I think the real reason that Ronald Reagan closed all the nut houses in California is just so that these folks could vote for the republicans.

"During Reagan's governorship, he dismantled the public psychiatric hospital system, advocating instead a community-based housing and treatment system to supplant it. Not enough state funding was devoted to the change."
(An unfunded mandate - the quintessential republican answer.)

Then again: "Over 100 cases of death by snake bite has been reported among the Christian practitioners of serpent handling."
Posted by Mysterion No comments: