the trinity of physics

A long time ago, I commented on the 'shadows on the wall' in the COBE temperature map. I theorized that as the big crunch was finished, our particular big bang passed through at least a few galaxies that had not yet reentered the singularity point - or barrier of black hole collisions (as far as that goes).

Then, there was the question of the singularity crunch - in which (outer ring) particles (protons,electrons, and neutrons) begin to break apart (leaving quarks to collide in a thick soup). This process was explored in 1956, at Berkeley. Particle physics would have to break at that period of time (at approximately 500 Mev) and then quark physics would take over. Next, quarks (sub-particles) would be bound in tightly packed collisions (inner circle) so that the Higgs field would collapse (above 130 Bev) and, in the absence of time, singularity (the inner dot) could occur. Time breaks down and only one Plank's loop of space - singularity - would remain. That is a single spinning ring! Proof? Here it is: 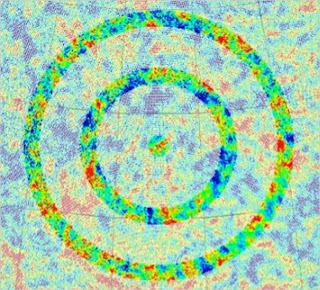 This cosmic worm hole is the space to all space, devoid of time altogether. HERE is an alternate theory (which I address below).

Spin? In the big bang?

So, at one extreme, you would think we would go to an ultra cold-dark still entropy (all mass, no energy) and at the other extreme an ultra hot-bright spin (all energy, no mass). But alas, not all of the energy is converted to mass in the cold-dark still phase (some motion remains) and not all of the mass enters singularity in the hot-bright spin phase (some mass lingers). Without some mass, spin would lack a critical dimension - length* (it's perpendicular to the red 'line' in the dot. In true singularity, there would be only a point with no length/width/depth dimension. The overall conceptual model is somewhat akin to this. Hot - bright - spin and cold - dark - still are extremes that, in our universe, simply do not quite exist. The secret to the big bang - to - big crunch is in the endless motion...

Hmmm... spin without mass (~pure energy) passing through singularity and rotational creep (~pure mass) without any heat (energy) at maximum expansion. Could it be?

Space is likely toroidal - like a donut. The "Dot" is just the tiny center of the donut hole. As matter is accelerated faster than the speed of light, space folds back on itself and the big crunch follows. Therefore, there is no time of a beginning and no time of an ending. We are endlessly recycled - in a somewhat sloppy manner. The three quanta states entering/leaving singularity are just the breakdown of (1) nuclear physics, the breakdown of (2) sub-particle quarks, and the breakdown of (2) time/space passing through space alone [singularity]. Time is created anew and it is time alone that separates the [unseen] parallel universes (dark matter?).

Big bangs are constantly happening - in quantum time. Parallel universes are constantly expanding while others, moving faster 'than the speed of light'*, are collapsing through singularity into yet more big bangs.
We are clusters of quantum consciousness within an incremental time. There is no reason to doubt that there are countless other clusters of quantum consciousness within other not quite countless parallel universes. We can estimate the mass of the whole system - 95% of the mass being shared in perhaps 20 parallel universes not altogether unlike our own (e.g. ~5% per universe +/- 0.025%).

*length exists because there is motion without time - or motion between time quanta at the moment (for lack of a better word) of singularity. Singularity moves (spins) in the absence of time - within the interval between two time quanta.

All of this aside, there is another model besides the toroidal model.
Posted by Mysterion No comments:

A Buddha in the closet?

"The forms of Buddhist writings are not simple. Their forms of composition and meaning(s) are respectively immeasurable and infinite." source

I often paraphrase this concept. Buddhism teaches nothing. Buddhism shows you how to teach yourself. It is the earliest known form or metacognition.