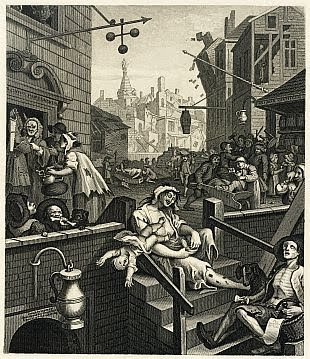 Mere mortal gutter scum is not allowed to communicate directly with the god(s). You see, there is such a vast power distance between the unwashed - but fruitful - meek and the uberfuhrers of heaven that an entire army of holy folks is required to relay the messages back and forth - for a fee.

And indeed, since the time of the Campus at Ostia and the Czars of Rome this has been the unchanging case. And why spoil such a good thing? (The Pope's daughter Lucretia Borgia was quite a tart. Prized for her beauty, she was much sought after by many.) Borgia also sponsored "the Dance of the Chestnuts." What a guy. You can now see that the see is sightless.

Gaius Julius Caesar, 46 BC - AVGVR above; PONT MAX below

So a Julius Caesar fellow held Pontifical Authority before the first pope was a twinkle in his mommy's eye! But wait - as they say - there is more.

Votive to the Queen of Heaven, with Child, from Ostia

Primus inter pares means "First Among Equals." Ya see, the Roman Church teaches that the Bishop of Rome [a.k.a. the Pope] has primacy among all the bishops of the world. This replaces Canon 7 from Nicaea. And this was before archbishops or cardinals existed. It was in the two later ecumenical councils, that of Ephesus, and that of Chalcedon [451 AD] that the bishop of Rome, as a precedence of honor among the five officially coequal patriarchs, was acknowledges as primus inter pares based on the prevailing myth that Peter had been the 'first pope.'. But, by this very concession Chalcedon disallowed Rome's claim to supremacy of jurisdiction, and to monarchical authority over the entire church. I won't go THIS FAR. However, undercurrents of Buddhism persist.

Romans also brought us the rex sacrorum and the Vestal Virgins - long before the Virgin Mari!

"There were six vestal virgins. [A Roman six-pack] All were traditionally chosen from old patrician families at a young age. They would serve ten years as novices, then ten performing the actual duties, followed by a final ten years of teaching the novices. They lived in a palatial building next to the small Temple of Vesta at the Roman forum. Their foremost duty was to guard the sacred fire in the temple. Other duties included performing rituals and baking the sacred salt cake to be used at numerous ceremonies in the year." (Sip the wine & munch the wafer)

Now I am no Freudian and I ain't gunna bring up all the really kinky stuff (red shoes = virgin's blood) lurking within in the id or lizard brains of some of these fools. But I was (long before Robert Langdon), and am now, a Jungian Symbologist. And repeated patterns of virgins and twins [kinky as it must have been] become obvious ad nauseum.

Up until the second century in the current era, even the mythical Jesus had a twin. Didymus is Greek for "twin", as Thomas is Aramaic for "twin." And the twins were the fish - Pisces. And many ceremonies were just borrowed from the previous occupant.

But the half-astrologers in Rome weren't gunna share THIS with the plebeians! And sometimes concordance was required.

Zosimus, the historian, attributed Rome's decline to the adoption of Xtianity. But I think it was just a coincidence. BTW, I've been wrong about this kind of thing before.

Despite republicans, the militant ignorant, and other obstructionists, the truth (like the pee from an incontinent virgin) will leak out. Rome was a Wal-Mart of religions. Roman Priest Czars had something for everyone. Truth be known, Jupiter, Juno, and Minerva were replaced with god, jesus, and mary. It was all a small slight of hand, perhaps in the mid 4th century. In 135 AD, a Roman Temple was erected on "the site of the Crucifixion" and dedicated to Juno, Jupiter and Minerva.

So what Rome succeeded in doing was usurping the Buddhist influx and stealing the pea (knowledge, teachings) from under the walnut shell. Next post, I will lay out a few dots about how 'sand and gravel' was turned into the Vatican Bank! You connect the dots (or don't).
Posted by Mysterion