deo vindice: 'an absurdity in bronze.' 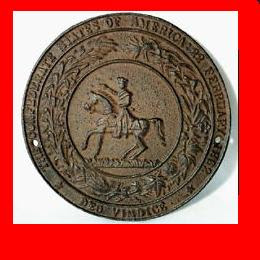 How does one translate the phrase deo vindice? It is engraved on the Confederate Seal. Most Southern Folks think it means God will vindicate. But it doesn’t.

Vindex (of which vindice is a form) could mean "protector" or "champion." And it could have been that the intended meaning was "with God as our champion."

But in classical Latin vindex often means "punisher." In this light, deo vindice becomes "with God as our punisher."

In the speech made by Mr. Semmes on that occasion: "MR. PRESIDENT…The committee has been greatly exercised [emotional] on this subject, and it has been extremely difficult to come to any satisfactory conclusion. This is a difficulty, however, incident to the subject, and all that we have to do is to avoid what Visconti calls 'an absurdity in bronze.'
Posted by Mysterion